- Minus sign indicates that a number is less than zero. It also denotes subtraction. The number, which is less than zero is called a negative number. In typography, minus sign is used, instead of hyphen. There is hardly any difference between the minus sign and hyphen. But typographers, who are very careful, use the appropriate sign for hyphen and minus sign.

The word subtraction is obtained from 2 words “sub” and “tract”. The word sub refers to below or under and the word tract refers to carry away or pull. Hence, subtraction means carrying away the number, from the lower one.

In Chemistry, minus sign is used to denote the property of rotating the polarised light in anticlockwise direction.

In Mathematics, minus sign, when placed between 2 numbers indicate that the 2nd number is to be subtracted from 1st number.

In Latin, minus refers to less.

The minus sign didn’t have any origin since ages. Its origin is also not very clear. Few say minus sign was originated during the hieroglyphic or Alexandria ancestry. It is also known to be used by merchants, in order to detach the tare from the weighing of goods.

The initial use of minus sign was in the German manuscript of algebra, found in the Dresden library in 1481. During a similar period, minus and plus signs were found in Latin manuscript. Johannes Widman was the person who studied both manuscripts. Leizig, in 1489, published his first book (Mercantile Arithmetic) and had mentioned about minus signs. An unknown manuscript has also used the minus sign. It gave inputs for publishing 2 books, during 1518 and 1525.

During the initial period of 17th century, in Italy, the minus sign was used by Cavalieri, Christopher Clavius who was an astronaut and Gloriosi, the Mathematician. In English, the minus sign first appeared in a book named Whetstone of Witte, which was written by Robert Recorde.

The usage of minus sign was very confusing. Earlier in Swiss, Dutch and German books ÷ (presently it is the sign for division) sign was used for minus sign. In few books, in 17th century written by Descartes and Mersenne, 2 dots (..) or at times 3 dots (…) were used for subtraction.

In Mathematics, minus sign is used to represent multiple things. They are as follows: 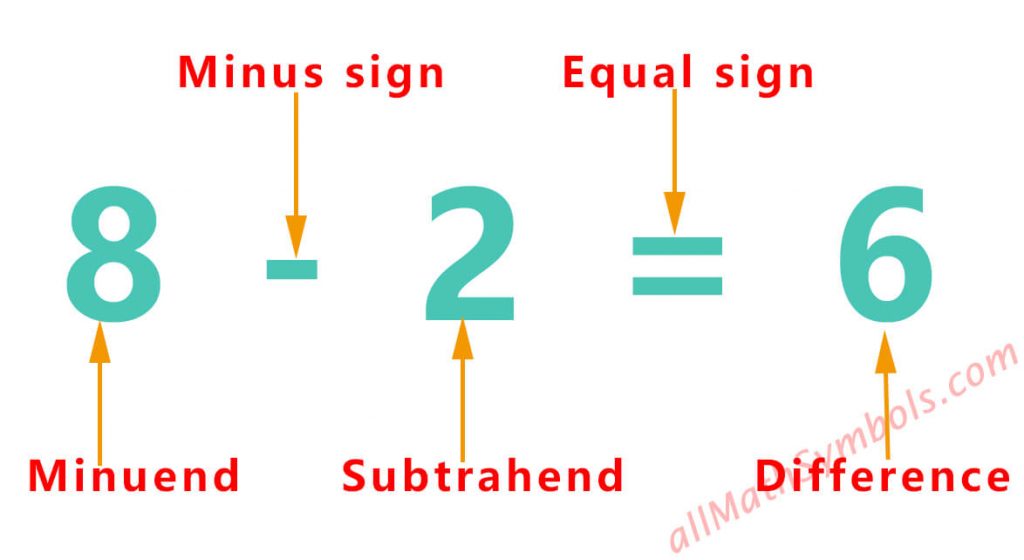 There are 4 parts in Subtraction. They are Minuend, Subtrahend, Equals sign and Difference.

Subtrahend – It indicates the 2nd number, which is to taken away from the 1st number. In the above example, 4 are called as Subtrahend. In subtraction, there can be multiple subtrahends. It depends on the complexity of the equation.

Equal Sign – It indicates that both sides correspond to the same value.

Difference – It indicates to the result obtained after the subtraction process.

There are 4 properties of Subtraction. They are Associative, Identity, Commutative and Inverse.

This property states that number minus 0, would result in the number itself.

This property indicates that changing the position of numbers in an equation won’t affect the final result. However, this property is also not applicable for Subtraction.

Addition and Subtraction process are usually opposite of each other.

For example, in this equation   8 + 6 – 6 = 8, adding and subtracting the same number would actually cancel them.

How to perform subtraction?

Below is the example:

If Nancy has 10 sweets and Lucy has 4 sweets, what is the difference?

As per the example, start counting from small number (4) and then count till the big number (10).

In complex cases, it is not possible to count, so the numbers are to be written column-wise, one above the other.

A hawker has earned Rs. 450 per day. He has spent Rs. 70 to buy groceries. How much money is the hawker left with, after buying the grocery?

The numbers are written column-wise and in correct order: 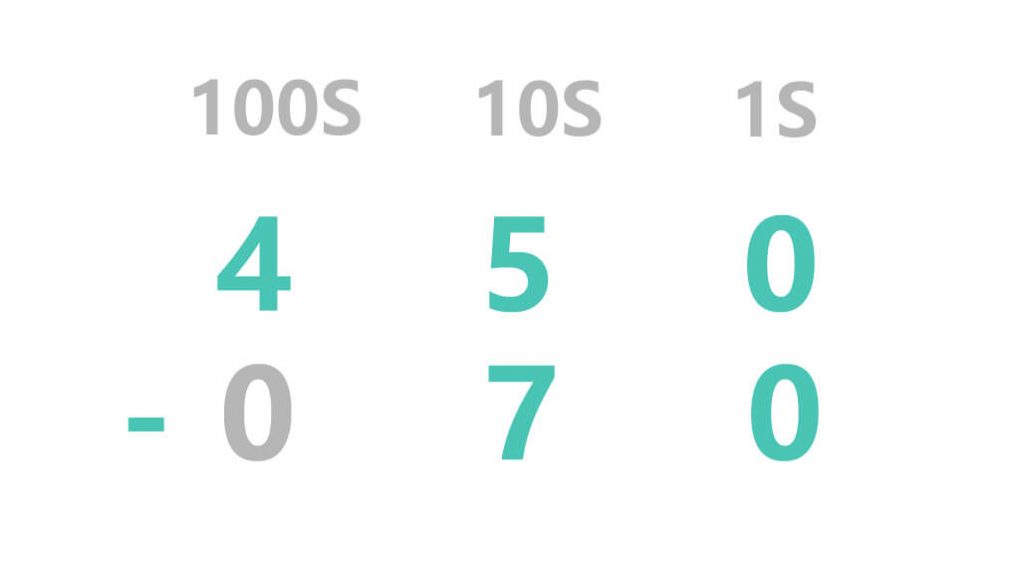 3. Borrowing can be repeated in Subtraction process

1s number has to borrow a number from 10s. So 10s number becomes 9 and 1s number becomes 11. Since the entire column wise numbers are now in proper shape to be subtracted, perform the operation.

The final answer is 2.

Nowadays, calculations can be performed in almost all devices for ease. Following are the steps to be performed, to type minus sign on various devices: 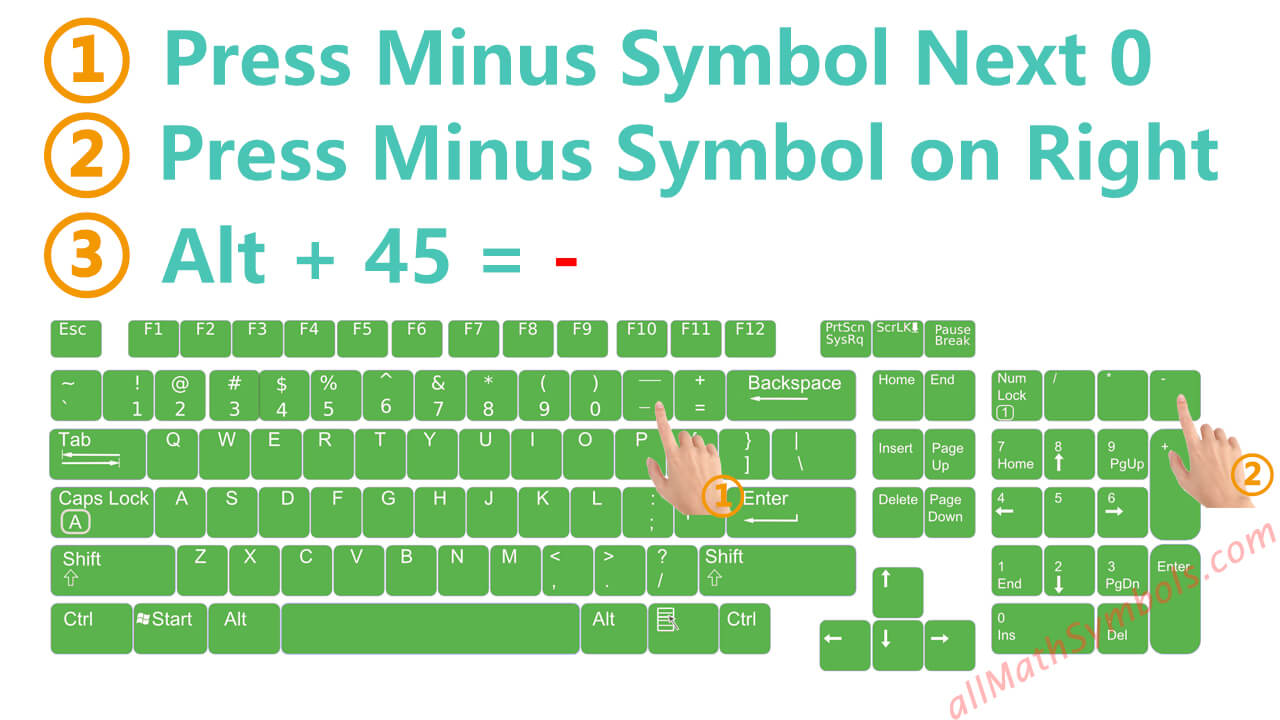 On a personal computer, minus sign can be typed by pressing the – symbol, which is next to 0 in the keyboard. Or press the minus sign button on the right side keyboard directly. Or hold Alt key and typing 45 to get minus sign, Alt + 45 = –. 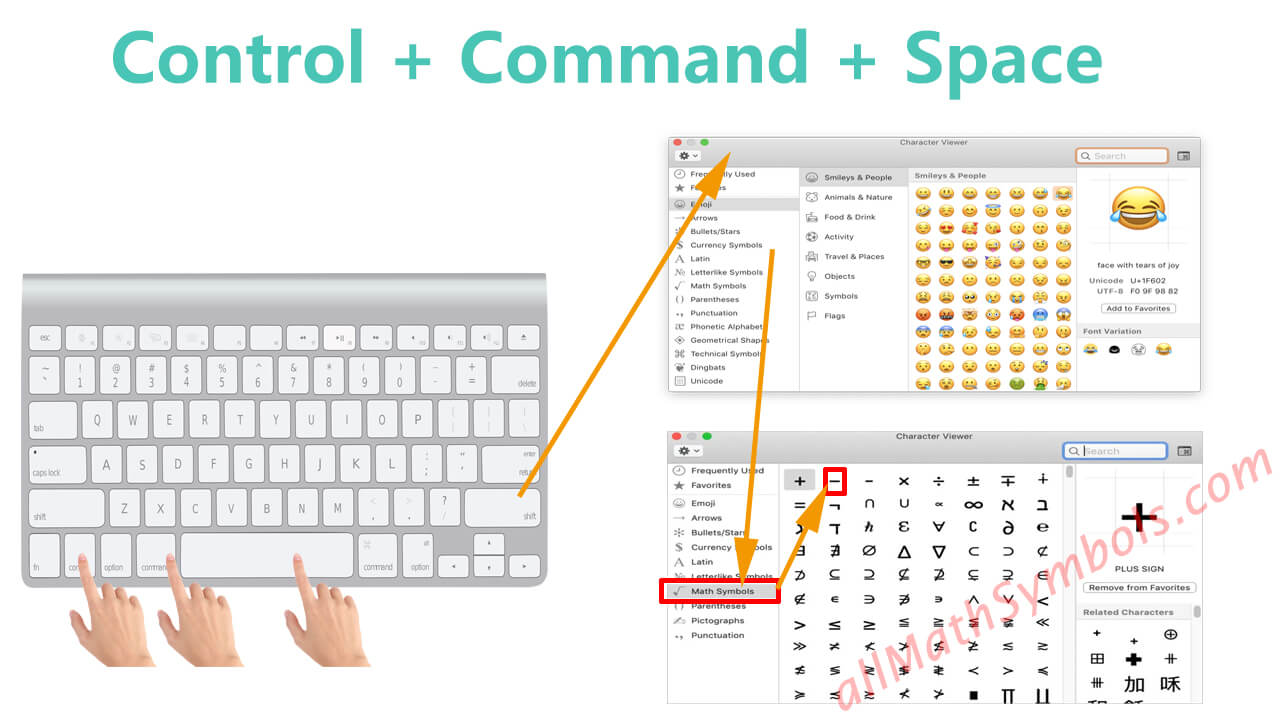 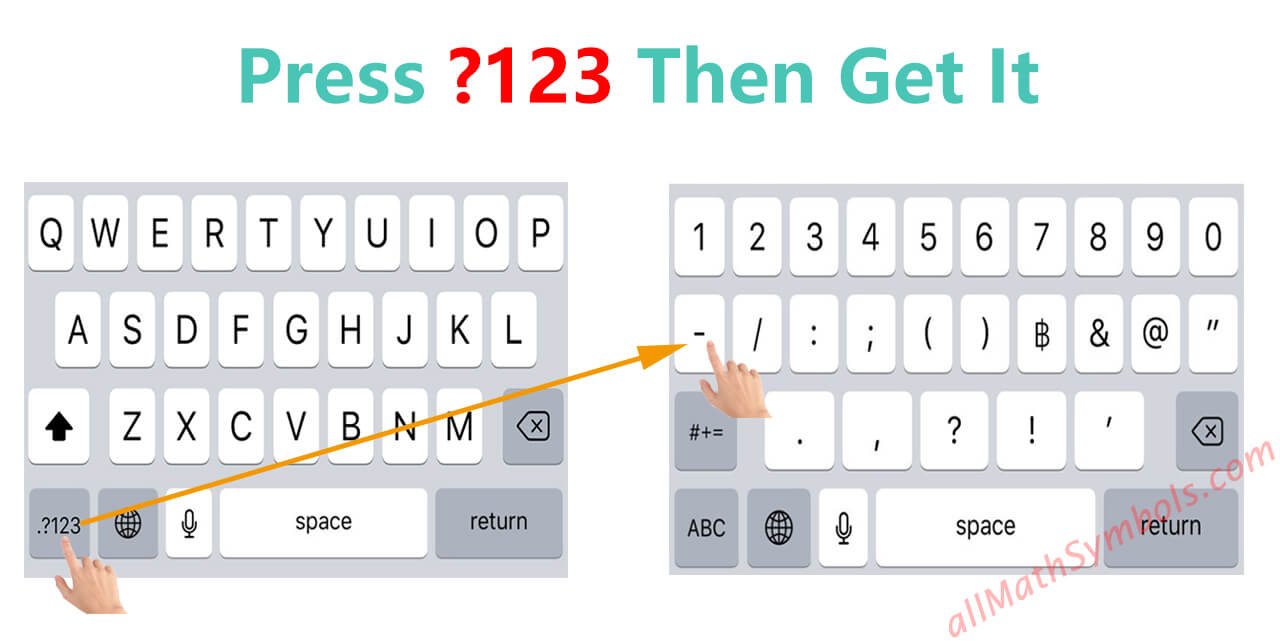 In iphone, the minus sign can be typed by pressing the button which has ?123. The window of numeric keypad will be opened and then search for the minus sign. 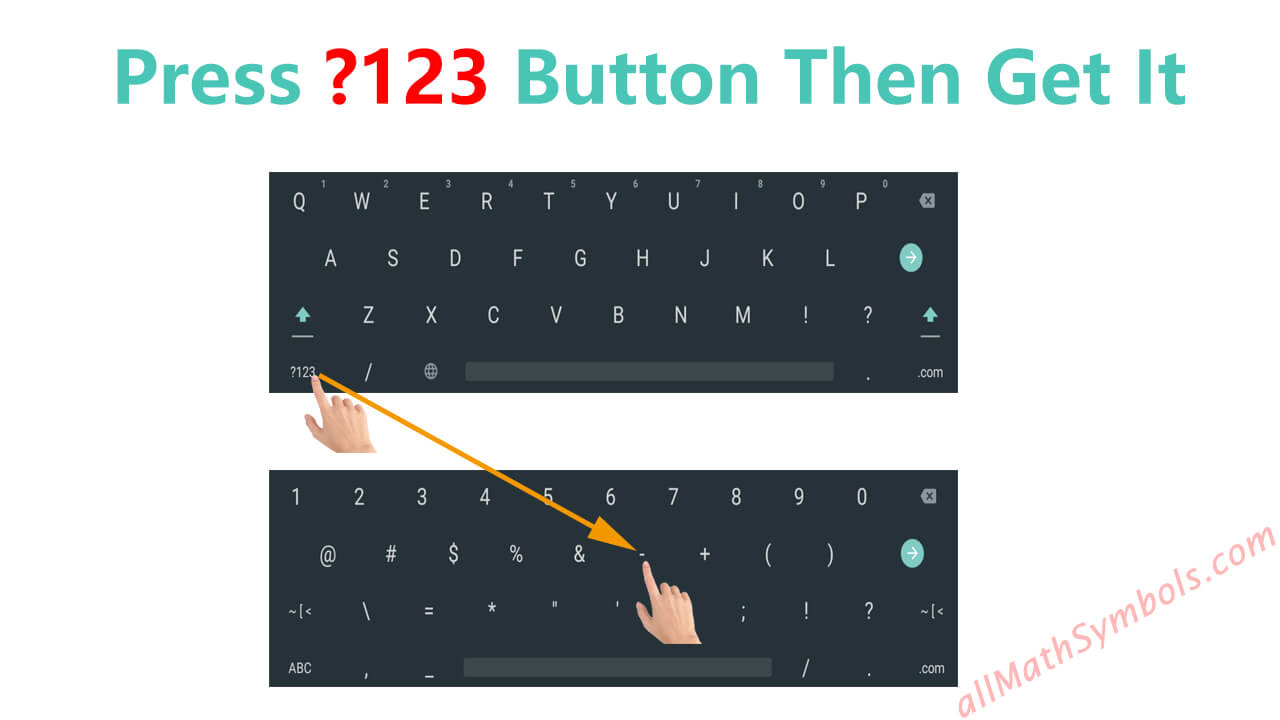 How to type a minus sign on Android phone

In Android phone, the minus sign can be typed by pressing the button which has ?123. The window of numeric keypad will be opened and then search for the minus sign. 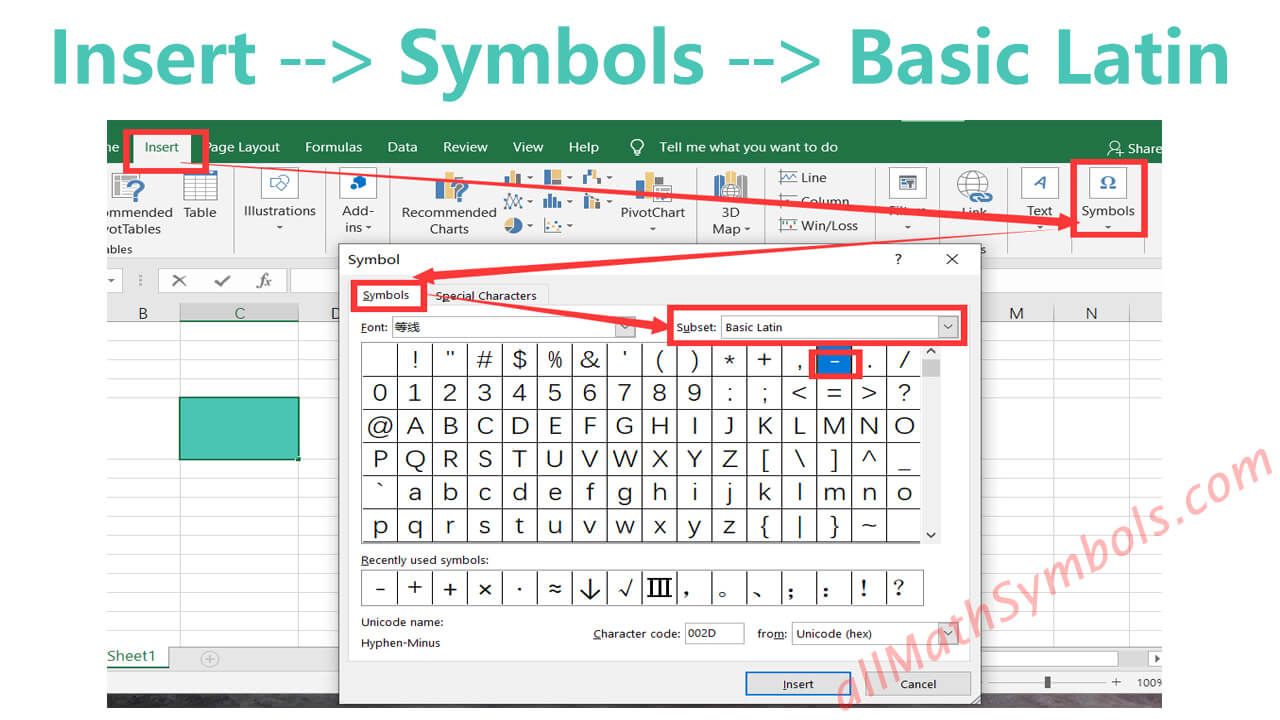 The same in Word

It is very essential to know the codes of all mathematical symbols. Following are the various codes of minus sign.

Minus  sign can be interpreted in a number of ways. Contrary to the usual convention of deducting a number through minus sign, it has other features also that are used in a number of applications. Following are the list of variants of subtraction.

-Minus symbol before a number. A number which is preceded with a minus sign is called a negative number. Negative numbers are always less than 0. Example, -10, -8.

±Plus minus sign. In Mathematics, this sign indicates that there are 2 operations which can be performed – Addition or Subtraction. This sign also indicates the range in some cases. For example, ±10. It means a field can accept values starting from -10 to +10.

-Hyphen sign. It is a punctuation mark which is used in joining 2 words. It is also known as minus sign or dash, negative or subtract.

Listed below are few tips and tricks which should be kept in mind while performing the subtraction process.

The number can be divided to remove the subtrahend. Below is the example.

Below are few FAQs which generally come in everybody’s while performing subtraction.

This article explains about the minus sign in a very detailed manner. It also explains how the subtraction process is to be carried out. Hope the readers find this article interesting.