+ Plus sign indicates that a number is a positive value or it indicates addition. It also indicates the existence of insertion.

In programming languages and in calculator keyboards, plus symbol refers to “ADD”.

The plus symbol also represents concatenation sign for text boxes. For e.g., first name + “  “+last name represents, display first name followed by a blank space and then followed by display of last name.

History of Plus Symbol

The plus is derived from the word plus’s first alphabet P.

The plus symbol did not have any origin, since ages. During the primitive ages, the Greeks indicated addition mainly by just a position. They rarely used the slash sign for addition. Pair of legs walking onwards indicated addition in the prominent Egyptian Ahmes papyrus. The Hindus had no indication for addition, like the Greeks, besides the “yu”, which was adopted in Bakhshali manuscript Arithmetic (dating 3rd to 4th century). One of oldest usage of plus symbol was discovered in the 14th century manuscripts of Nicole Oresme. In Europe, during early 15th century, letter”P” was used. The symbol P with overline, represents plus , appeared in Luca Pacioli’s Mathematics compendium for the first time. This was first published and printed in Venice during 1494.

The initial use of modern algebraic symbol appeared in German algebra manuscripts since 1481. This was located in Dresden library. Johannes Widmann explained and investigated plus symbol. Leipzig, in 1489, issued his book, the name of which was Mercantile Arithmetic, where plus symbol was mentioned. During the same year, Johannes Widmann mentioned plus sign as mer. In modern German language, mer means more. Plus symbol wasn’t used for addition. It was just used to represent surplus. This was mentioned in a book written during 1518 by Henricus Grammateus.

In Britain, the plus symbol was introduced by Robert Recorde (he was the designer of equal symbol) in 1557 in the book The Whetstone of Witte.

Starting since 17th century, in Italy, the plus symbol was accepted by Christopher Clavius, who was an astronomer and Cavalieri.

The plus sign is simplification of Latin word et (while comparing to the evolution of ampersand &).

The father of addition was Brahmagupta. This was popular during the medieval Europe known as “Modus Indoram” or Method of Indians. 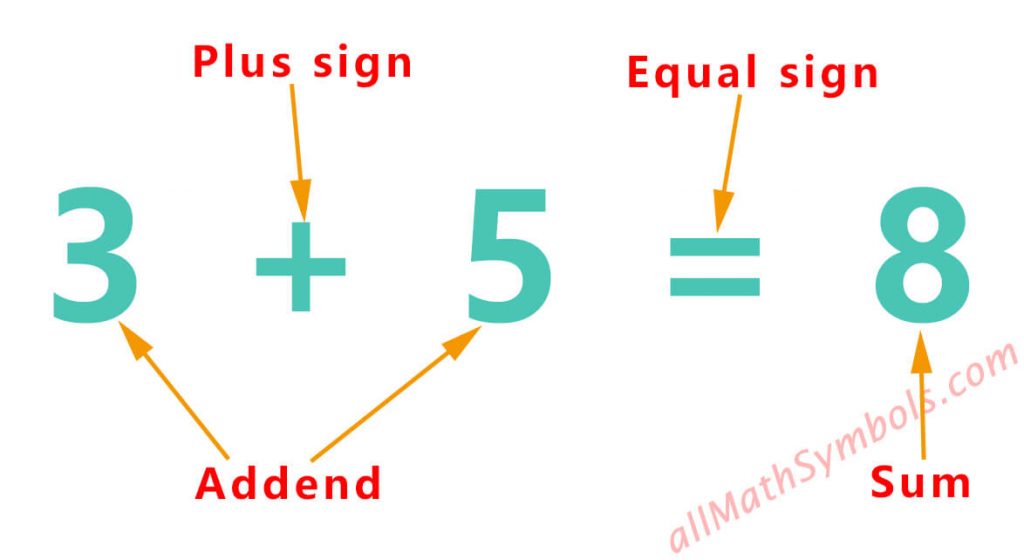 Plus sign came in the picture, so as to enable us to easily understand the operation to be conducted.

There are 3 parts in addition – Addend, equal sign, sum.

Addend – Basically they are the numbers, which are to be added together.

Equal sign – It indicates 2 halves of the equation are equivalent.

They are Additive Identity, Associative, Distributive and Commutative.

Adding any number with 0, would result in the number itself.

Regrouping the addends would give the same result.

Basically it is multiplying the summation of 2 or additional addends with a number, which would give similar result as in if you would multiply each add-end separately with the number and then adding all the products.

If the numbers added are in any order, the result would be the same.

Mathematics is a subject, which arose with the need to do calculations and addition was necessary to make the calculation process simpler. 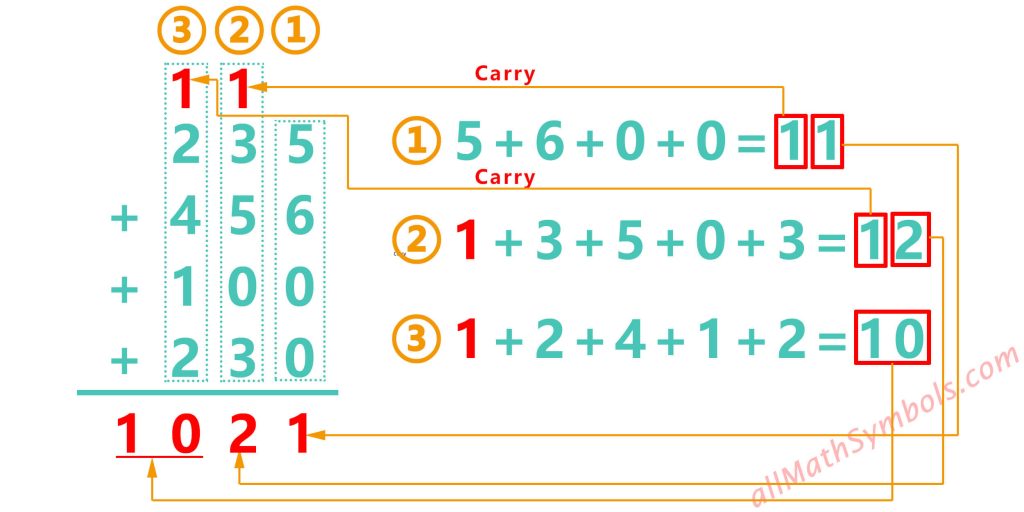 This is same as addition of whole numbers. The decimal numbers are arranged and the columns are aligned, by place value. If the number doesn’t have decimal or is a whole number, then that number can be padded with 0s. In case, any number is of 5 digits and other addends are only 3 digits, then add zeros to the beginning of the 3-digit number, so that it becomes 5 digit. 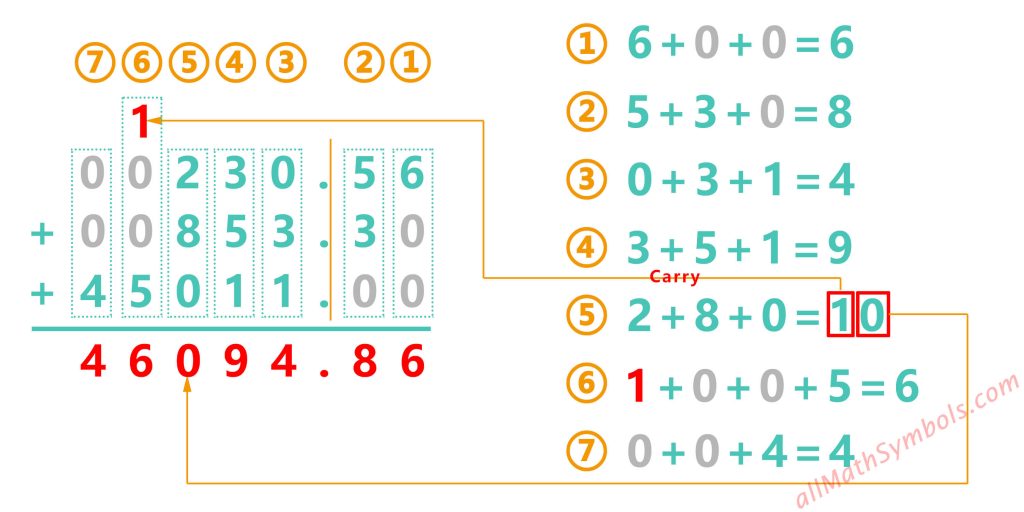 1. Cross multiplying the fractions and then adding the results would give the final value of the numerator.

The final numerator value can be obtained by adding these results.

3. Combine the final result of numerator value and denominator value.

How to Type Plus Symbol

Now calculations are possible even on modern gadgets like a computer, laptop, Macbook, iphone etc., but how to get the plus sign for addition is also essential to know, as otherwise you won’t be able to do calculations on the gadget you own. 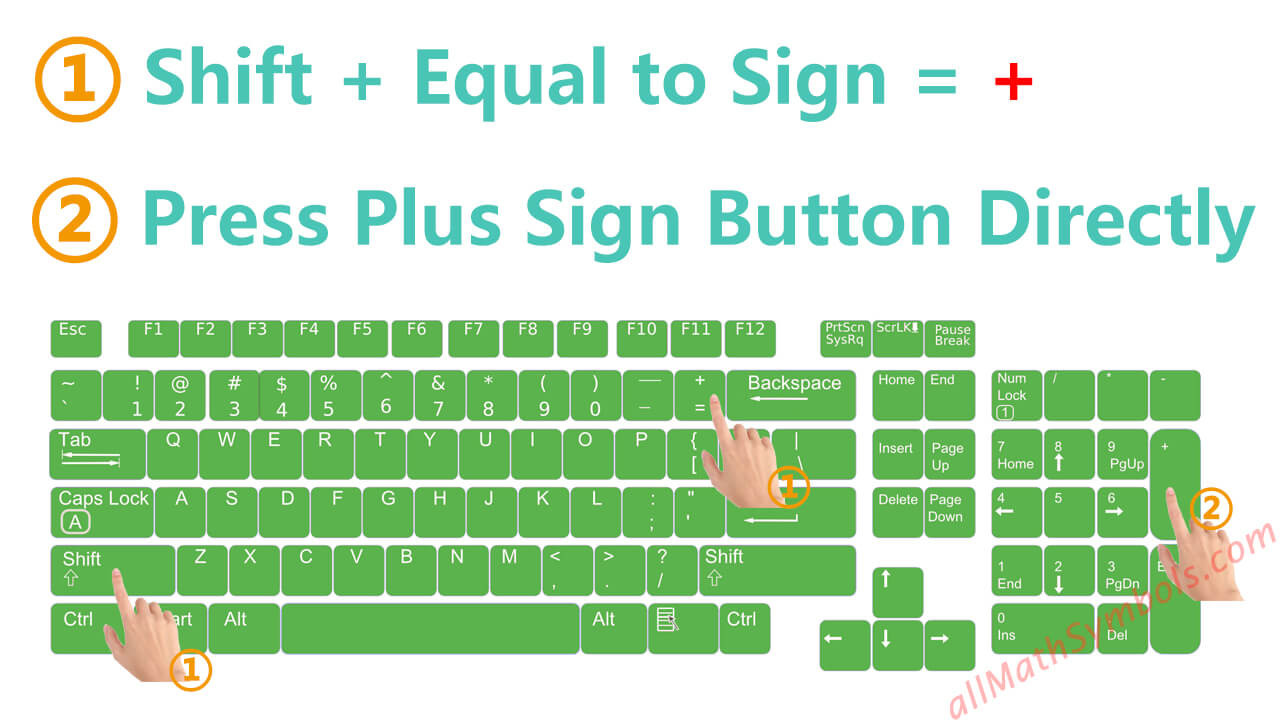 How to type a plus sign on the keyboard

On a Personal computer, it can be typed by holding the shift key and then pressing the equal to sign, (which is before the backspace key) on the keyboard. Or press the plus sign button on the right side keyboard directly. 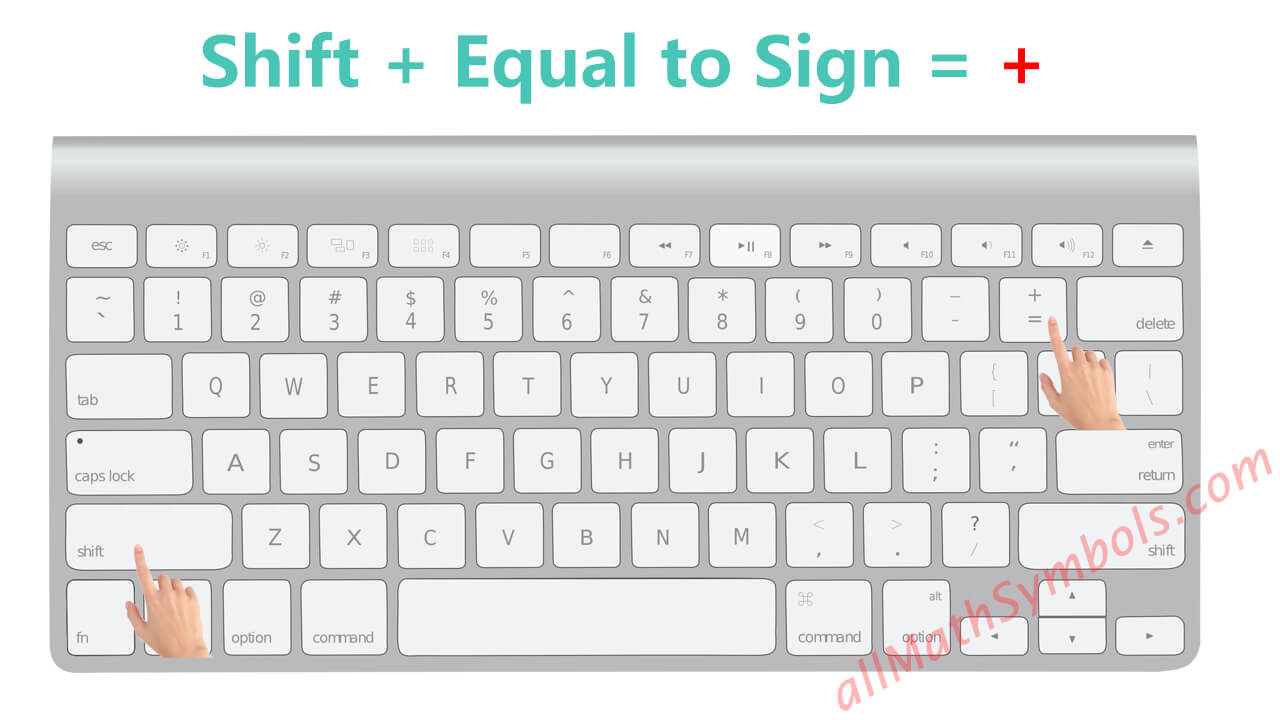 On Macbook running on MacOS, hold the “Shift” keys and then pressing the equal to sign, which is on the top row of the keyboard. 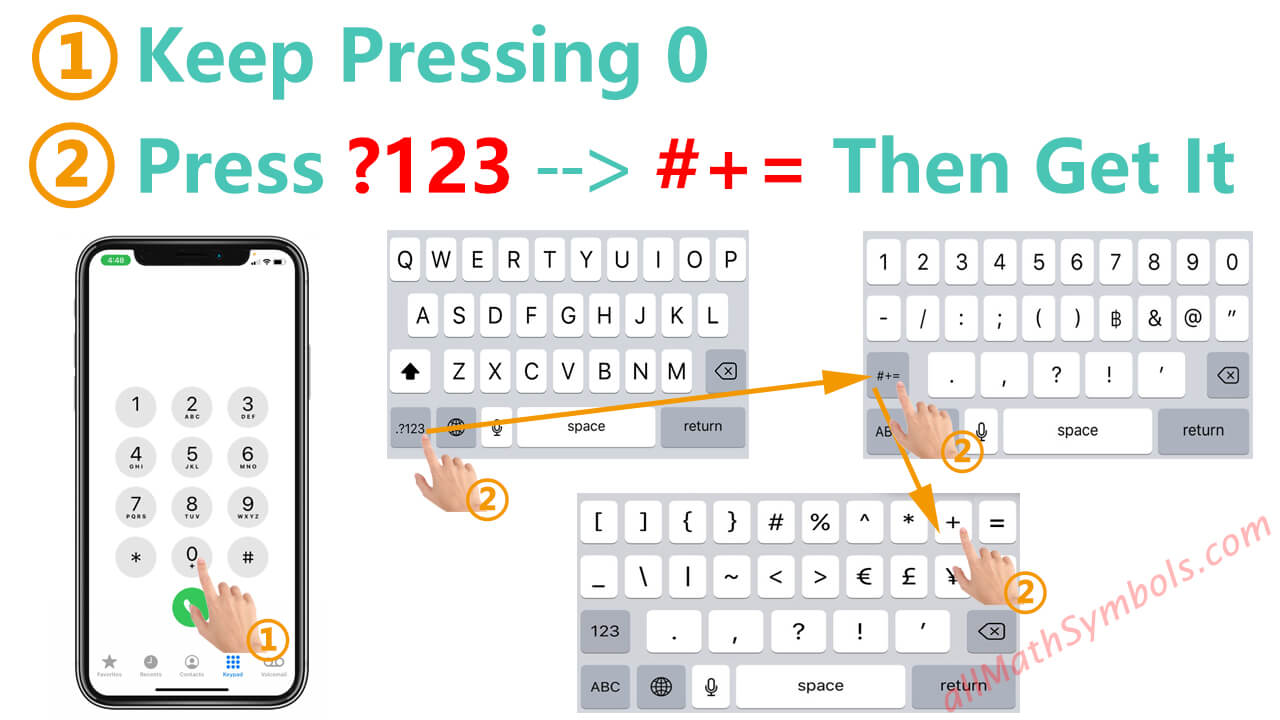 On iphone, keep pressing 0 on the keypad, until the plus sign appears. Or open keyboard and press ?123 button, then find the #+= button in the lower left corner, press it, you will get the plus sign in next screen. 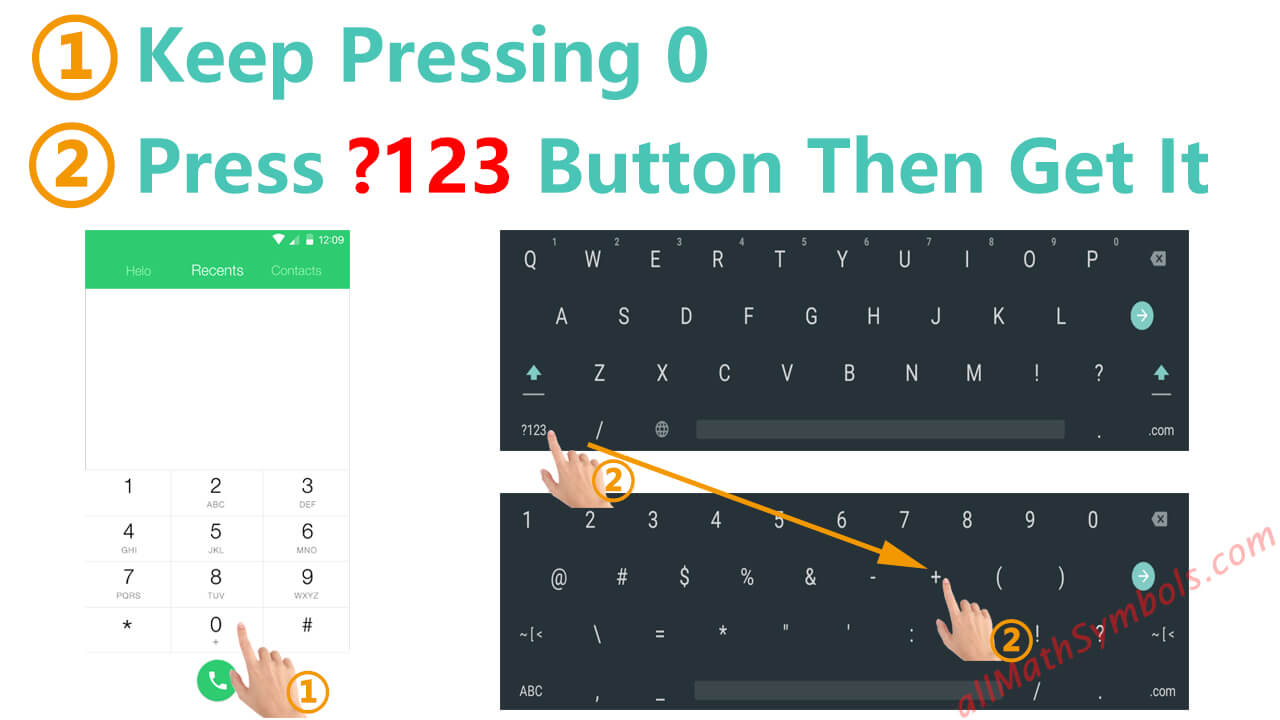 How to type a plus sign on Android phone

There are two ways, the first, keep pressing 0 on the dial pad, until the plus sign appears.  The other is that open keyboard and press ?123 button, then get the plus sign in numeric keypad window. 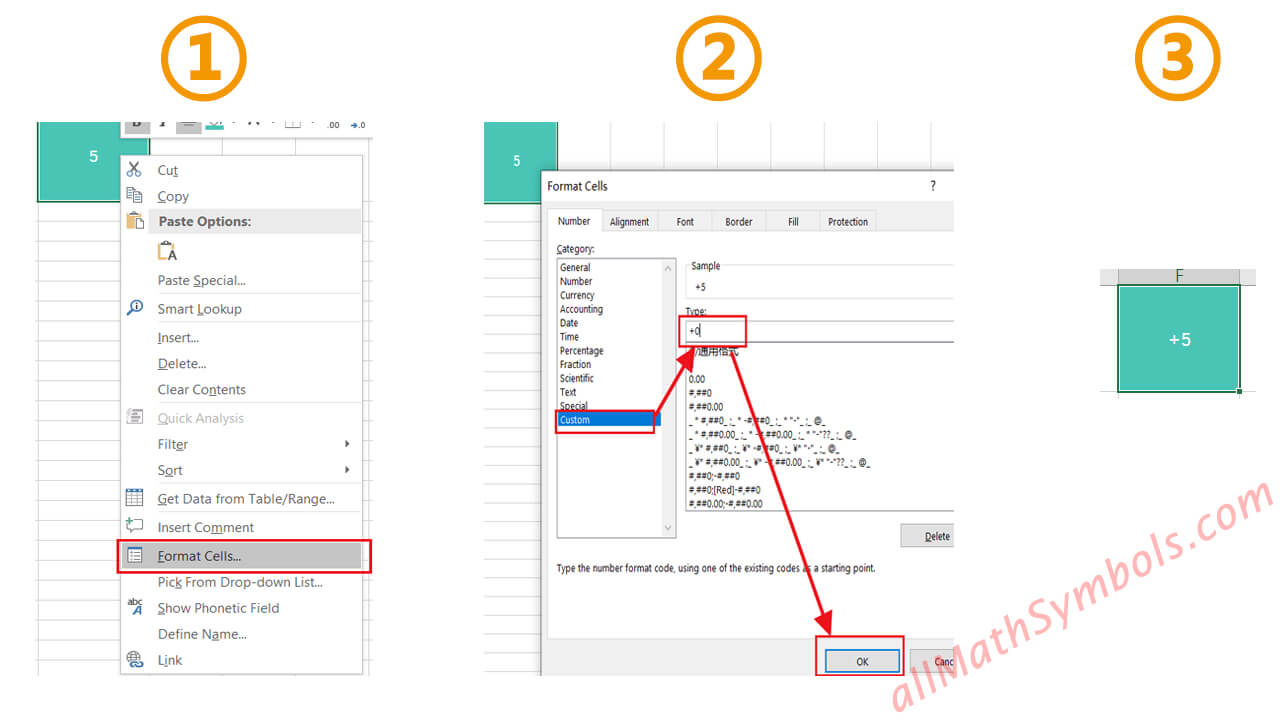 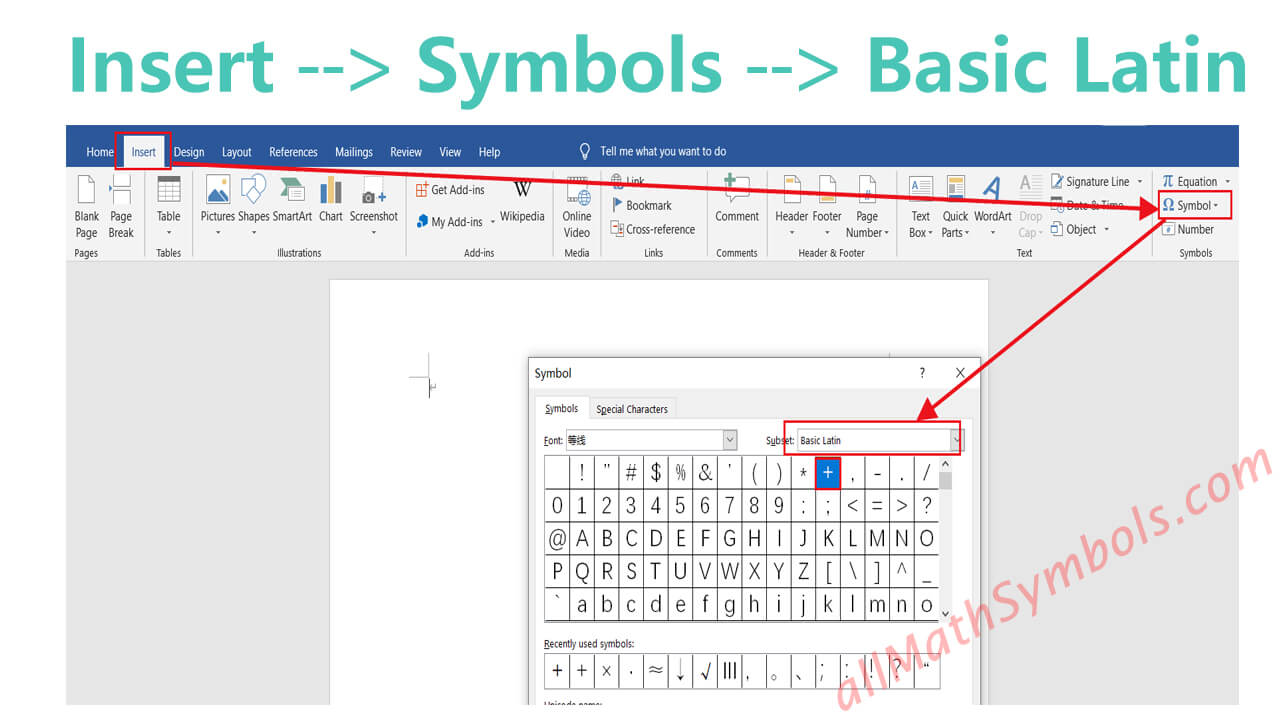 It’s very necessary to know the codes of all signs and also of the plus sign.

Following is the table of codes for the plus sign:

Variants of Plus Symbol

To make calculations more simpler, after the invention of maths symbols, their variants were also created.

Example: +5 and 5, both these numbers are the same. They are greater than 0.

±Plus minus symbol. This symbol shows that there are 2 choices of values.  One can be obtained by addition and other by subtraction.

It can also be used for an operation, which is likely to be addition. It is not a regular addition of integers. It is called as exclusive OR operation.

++Double plus. Double plus one is a concept of adding 2 consecutive numbers.  Here if the smaller number is doubled or added twice and the result is added by 1.

If you know the tricks and tips in mathematics, then you can do it faster.

Count can be done by making jumps, 2s, 10s to solve the calculation.

Start counting from the bigger number

When the numbers are same, double them

If there are series of numbers given for addition, check if any numbers sum up-to 10. The numbers needn’t be next to each other.

Compensation means rounding off a number and then taking off the extra number to get the result. This makes the addition process simpler.

If the numbers are nearby, double them and then fix

Break the given numbers into Tens and Units. Add the units first and then add then to 10s.

Addition can be performed with the help of Addition table.

Go down to 5th row and then the corresponding 2nd column. The result is 7.

Similarly, if we go down to 2nd row and then the corresponding 5th column, the result is 7.

While adding 2 numbers, if one number is close to 10, then borrow from the other number to get 10.

Moving backwards is also possible, by making the other number bigger.

These are some questions which may arise in your mind, in relation to plus sign. We have tried to give you answers to the most commonly asked ones:

We have tried our best in this article to touch every aspect related to the plus sign and give you an insight on it and to improve your calculative skills and also to make you faster at calculations. Hope you find this article useful.